We are absolutely thrilled to congratulate India Lee who at the weekend become the elite European Triathlon Champion winning with a dominate performance in Lisbon. Taking on a field full of top class athletes Indie came out of the water in 18th position before showing her incredible strength on the bike to hit the front alongside fellow GB elite, Lucy Hall to build a 90 second lead going into the run. Holding off the huge chasing field India won from Yuliya Yelistratova of th

Firstly we are absolutely over moon to see India Lee win the Elite European Triathlon Championships in Lisbon in May. Taking on and beating some of the best triathletes in the world India has now marked herself as one the the big names to watch in the sport. This came ht on the heels of another huge win at the ITU World Cup in Italy. You can real more about these races here. May is often a month where runners are resetting and focusing on some of the shorter, faster races of

Nick and Tom will once again be commentating on the Amba Hotels City of London Mile on the 19th June. The race is a unique experience to race a mile on closed roads right through the city of London. It's totally free to enter and there are still places available so be sure to check it out! http://www.cityoflondonmile.co.uk/ 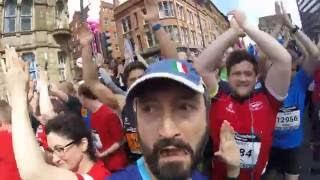 The Manchester 10km - a runners view!

RunningwithUs athlete and videographer Donato recent ran the Manchester 10km. Here is his unique perspective on the race! (warning it includes signing and dancing!)

You might notice the website looks a bit different! We have been working over recent weeks to liven it up, freshen the look and make the whole site a bit easier to navigate on a mobile. We hope you like it. Thanks to Susie Bush whose design skills and ideas have helped loads. Susie has been a top runner herself, racing at an international level, so really gets what we do as coaches. If you are looking for digital or print based design work do check her out! - http://www.susie

We have had a fantastic few weeks at RunningwithUs through the busy April Marathon season. You guys have been out racing and achieving fabulous results from Manchester to London, Brighton to Paris. We were also delighted to see many of our partners achieve huge success at The Running Awards with Cancer Research UK winning charity of the year and the Alzheimer's Society picking up a runners up award in the same category. Our nutrition partners High5 achieved several runners up

Without doubt the best running specific underwear available anywhere. It's that simple. In the time we have been coaching you wouldn't believe the number of questions we get asked about how to find comfortable underwear that eliminates chafing for running and triathlon as well as a range of other team sports. We have known Jamie Smalley and Richard Edmonds for many years. They are runners, they understand what runners need and we have even coached Jamie to run sub 2.45 for th

India Lee claimed a fantastic win at the ITU World Cup race in Cagliari. The race, taking place over the sprint distance, included some of the sport's top names including Carolina Routier and a strong British team including Heather Sellers. India came out of the water a few seconds down on the leaders but again showed herself as one of the top cyclists in the sport, dominating the bike, to build a lead of 40 seconds heading into the run. Despite a strong effort from Lisa Sieb

Getting to the Core

Racing without a running watch, what happens when you run 'naked'?

ARE YOU RACE READY?!

The long run - all of your questions answered!

How to run a marathon!

HOW DO I..? Prepare for race day - Women's running by Nick Anderson